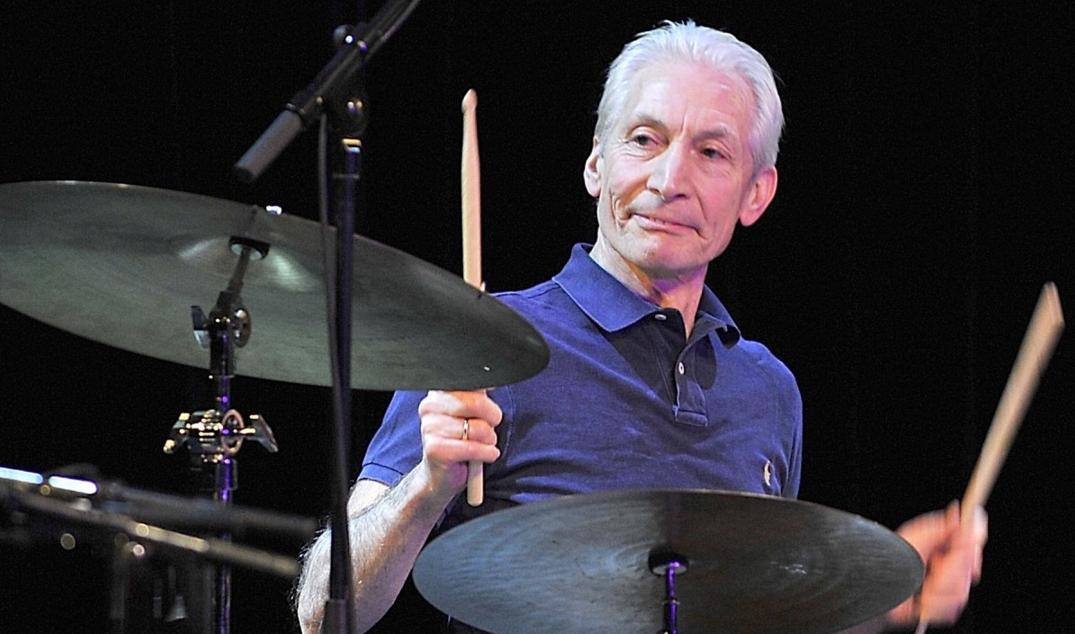 Charlie Watts, born Charles Robert Watts on June 2, 1941 in Islington, London Borough of Islington, London, England, is an English musician, best known as the drummer for The Rolling Stones (1963 to present). Charlie is also the leader of his own jazz group, a record producer, a commercial artist, and a horse breeder.

Charlie Watts became interested in drumming around the age of thirteen after hearing jazz drummer Chico Hamilton playing with Gerry Mulligans band. A year later, in 1955, Watts received his first drum kit as gift from his parents. At this time his main musical interest was jazz — practicing his drumming by playing along with his collection of jazz records.

After completing high school (aka secondary school), Watts enrolled at Harrow Art School (now the University of Westminster) which he attended for a brief, leaving in 1960 to work as a graphic designer for an advertising company while play drums around town with local bands.

Watts was invited to join Alexis Korner’s band, Blues Incorporated, in 1961 — an offer he would accept in February 1962 after he returned to London from a graphic design job in Denmark. On April 7, 1962, Watts met Brian Jones, Ian “Stu” Stewart, Mick Jagger, and Keith Richards for the first time when the group came out to hear a Blues Incorporated performance. After that night (and a demo recording sent prior to their meeting) Korner invited Jagger and Richards to begin jamming with Blues Incorporated on a regular basis. A few months later the boys (Jagger, Richards and Mick Taylor) left Blues Incorporated to join a new Chicago blues style band that Brian Jones and Ian Stewart had put together. Billed as “The Rollin’ Stones” the band played its first gig on July 12, 1962 with Jagger, Jones, Richards, Stewart, Taylor, and drummer Tony Chapman. In January 1963, Watts finally agreed to join The Rolling Stones and has remained the band’s drummer ever since.

Charlie Watts has been involved in numerous activities outside his rock ‘n’ roll life with The Rolling Stones — predominantly with his personal music tastes — jazz. In the late 1970s, Watts joined Ian Stewart in a boogie-woogie band, Rocket 88, which featured many of the UK’s top jazz, rock and R&B musicians. In the 1980s, he toured worldwide with a big band that included such names as Evan Parker, Courtney Pine and Jack Bruce, who was also a member of Rocket 88. In 1986 Watts released his first solo recording, The Charlie Watts Orchestra Live at Fulham Town Hall. He organized a jazz quintet and recorded two albums as a tribute to Charlie Parker; From One Charlie (1991) and A Tribute to Charlie Parker with Strings (1992). The Charlie Watts Quintet, which included vocalist Bernard Fowler, released two records that included a collection of Great American Songbook standards; Warm And Tender (1993) and Long Ago And Far Away (1996). After a successful collaboration with Jim Keltner on The Rolling Stones’ Bridges to Babylon, Watts and Keltner released a techno/instrumental album — Charlie Watts/Jim Keltner Project — which captures the “feeling” (not the drumming style) of legendary jazz drummers as Elvin Jones, Max Roach and Roy Haynes.

Besides making music playing the drums, Charlie Watts continued with his graphic design talents and creative ideas. In 1964, he published a cartoon tribute to Charlie Parker entitled Ode to a High Flying Bird. He contributed graphic art to early Rolling Stones records such as the Between the Buttonsrecord sleeve. Watts was responsible for the band’s 1975 tour announcement press conference in New York City where the band surprised waiting reporters by riding in on the back of a flatbed truck (à la The Beverly Hillbillies) while playing “Brown Sugar” in the middle of Manhattan traffic. Watts has stated that he remembered this was a common way for New Orleans jazz bands to promote upcoming dates. Watts, along with Jagger, also designed the elaborate stages used for Rolling Stones tours — his first contribution was the lotus-shaped design for the 1975 Tour of the Americas, as well as the 1989–1990 Steel Wheels/Urban Jungle Tour, the 1997 Bridges to Babylon Tour, the 2002-2003 Licks Tour, and the 2005-2007 A Bigger Bang Tour.