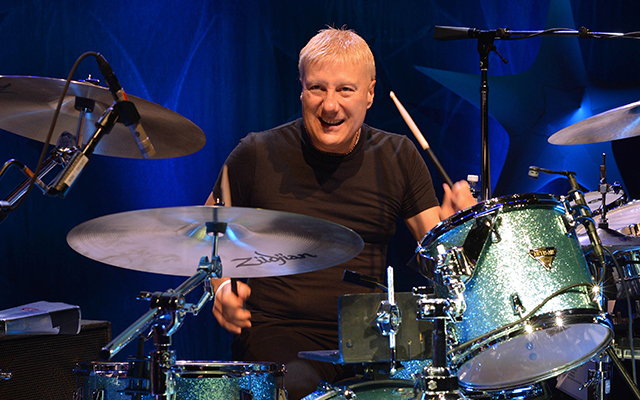 Gregg Bissonette, born June 9, 1959 in Detroit, Michigan, is an American drummer and educator, best known for his work with Maynard Ferguson, David Lee Roth, and Ringo Starr & His All-Starr Band, however, he has worked with numerous artists and groups in a wide variety of music styles and genres.
One little known fact about Gregg is that he does voice over work for the animated character, Winnie the Pooh.
At the age of five, Gregg started playing the drums on his dad’s drum kit and studied drumming with his father for the next five years. When he was ten, Gregg started taking private rudimental snare drum lessons with a local teacher, Bob Yarborough. By age eleven, Gregg was playing the drum set (and reading drum set music) as well as studying and take lessons on trumpet.
At the age of fourteen, Gregg started taking drumset lessons from Detroit drummer, Myron MacDonald, and started a band (Today’s People) with his brother Matt (bassist/producer). By the time he was fifteen, Gregg won a scholarship to attend the summer camp at Interlochen School of Music in Michigan. He was also playing professionally around the Detroit area with his dad’s band, The Buddy Blair Band.
While attending Warren Mott High School, Gregg was the drummer for jazz band and played with numerous professional groups in the area, including The Brookside Jazz Band, The Austin/Moro Band, and a progressive big band called Concertjazz.
Gregg and his brother Matt would go on to start another band, Grand Circus Park, which featured all of their high school musician friends, and primarily performed cover tunes from the legendary band, Chicago.
After graduating high school, Gregg went on to attend North Texas State University (now the University of North Texas) — playing drums in the famed NTSU One O’Clock Big Band and recording two albums, Lab 80 and Lab 81. He was also a member of two Dallas-based bands, The Buster Brown Band and Network.
print
Loading...
Previous Post Next Post