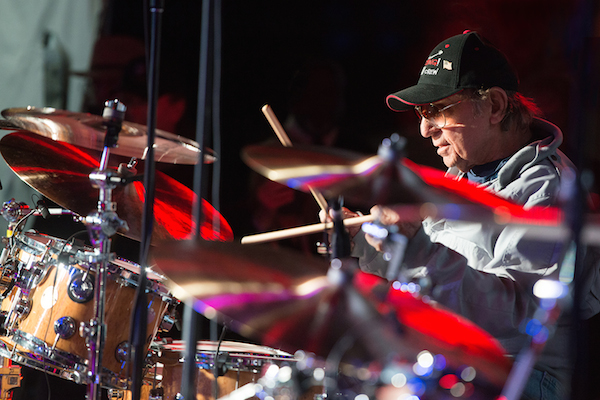 Hal Blaine (born Harold Simon Belsky; February 5, 1929) is an American drummer and session musician.
He is most known for his work with the Wrecking Crew, a group of musicians who recorded prolifically in the Los Angeles music scene and played behind a large number of musicians in the 1960s and ’70s. Blaine played on numerous hits by popular groups, including Nancy Sinatra, Jan and Dean, Elvis Presley, John Denver, the Ronettes, Simon & Garfunkel, the Carpenters, the Beach Boys, the Grass Roots,the 5th Dimension, the Monkees, the Partridge Family, and Steely Dan. He has played on 40 number one hit singles, 150 top ten hits and has performed on, by his own accounting, over 35,000 recorded tracks. He is widely regarded as one of the most prolific drummers in rock and roll history, having “certainly played on more hit records than any drummer in the rock era”.
Blaine is a member of the Rock & Roll Hall of Fame, Musicians Hall of Fame and Museum, and the Percussive Arts Society Hall of Fame. He was inducted into the Modern Drummer Hall of Fame in 2010.