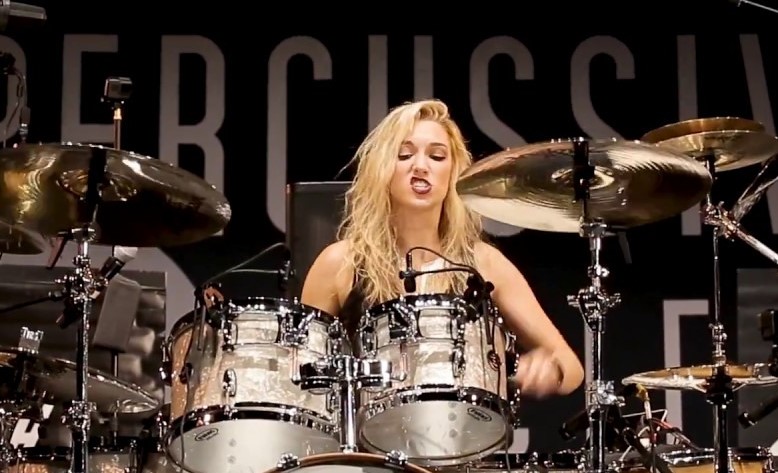 Hannah Welton-Ford (born June 29, 1990) is an American musician, drummer and vocalist from Louisville, Kentucky.
Previously a member of fusion trio Pandorum and later rock band Bellevue Suite, she played in Prince’s backing band 3rdeyegirl with guitarist Donna Grantis and bassist Ida Kristine Nielsen.
Hannah is married to Joshua Welton, who co-produced three Prince albums and guested with 3rdeyegirl performances on keyboard and cowbell.
Welton was recruited by Prince in September 2012 as a guest drummer for the Welcome 2 Chicago three-show residency after seeing videos of her performing online. Soon after, she appeared as lead drummer of the New Power Generation for Prince’s performance of his song, Rock And Roll Love Affair on Jimmy Kimmel Live!’s show on 23 October 2012, as well as in the official music video. Asked by Prince to look for a female guitarist, Hannah, together with her husband Joshua, scouted online and found Donna Grantis via her videos on YouTube in late November. She auditioned one week later at Paisley Park Studios and subsequently recruited in December 2012. Bassist Ida Nielsen had been performing with The NPG since October 2010, and the only member of the trio to have previous experience playing for Prince.
3rdeyegirl were formed in December 2012 and went on to tour with Prince on his Live Out Loud Tour in 2013, and his Hit and Run Tour from 2014-15. They released one album, Plectrumelectrum, in 2014. Joshua Welton would also join the tours on percussion. He co-produced Prince’s next two albums, Art Official Age and Hit n Run Phase One, and co-wrote most tracks on the latter.