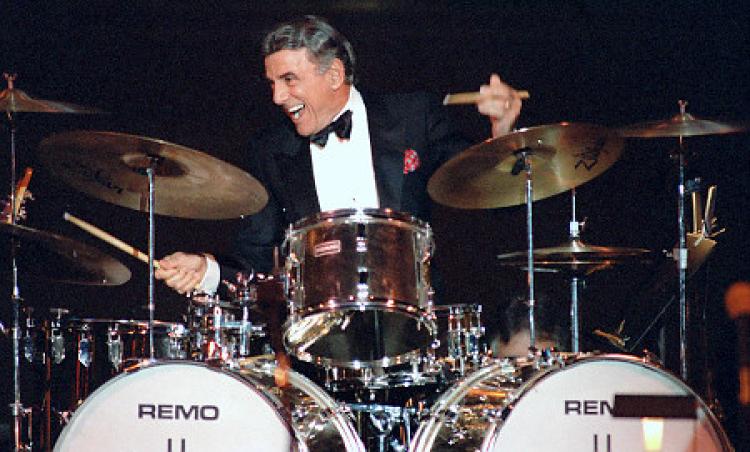 Louis Bellson (born Luigi Paulino Alfredo Francesco Antonio Balassoni on July 6, 1924 – February 14, 2009), known by the stage name Louie Bellson (his own preferred spelling, although he is often seen in sources as Louis Bellson), was an American jazz drummer. He was a composer, arranger, bandleader, and jazz educator, and is credited with pioneering the use of two bass drums.
Bellson was an internationally acclaimed artist who performed in most of the major capitals around the world. Bellson and his wife, actress and singer Pearl Bailey (married from 1952 until Bailey’s death in 1990), had the second highest number of appearances at the White House (only Bob Hope had more).
Bellson was a vice president at Remo, a drum company. He was inducted into the Modern Drummer Hall of Fame in 1985.
Bellson was born in Rock Falls, Illinois in 1924, where his father owned a music store. He started playing drums at three years of age. While still a young child, Bellson’s father moved the family and music store to Moline, Illinois. At 15, he pioneered using two bass drums at the same time, a technique he invented in his high school art class. At age 17, he triumphed over 40,000 drummers to win the Slingerland National Gene Krupa contest.

After graduating from Moline High School in 1942, he worked with big bands throughout the 1940s, with Benny Goodman, Tommy Dorsey, Harry James, and Duke Ellington. In 1952, he married jazz singer Pearl Bailey. During the 1950s, he played with the Dorsey Brothers, Jazz at the Philharmonic, acted as Bailey’s music director, and recorded as a leader for Norgran Records and Verve Records.

In an interview in 2005 with Jazz Connection magazine, he cited as influences Jo Jones, Sid Catlett, and Chick Webb. “I have to give just dues to two guys who really got me off on the drums – Big Sid Catlett and Jo Jones. They were my influences. All three of us realized what Jo Jones did and it influenced a lot of us. We all three looked to Jo as the ‘Papa’ who really did it. Gene helped bring the drums to the foreground as a solo instrument. Buddy was a great natural player. But we also have to look back at Chick Webb’s contributions, too.”

During the 1960s, he returned to Ellington’s orchestra for Emancipation Proclamation Centennial stage production, My People in and for A Concert of Sacred Music, which is sometimes called The First Sacred Concert. Ellington called these concerts “the most important thing I have ever done.”

Bellson’s album The Sacred Music of Louie Bellson and the Jazz Ballet appeared in 2006. In May 2009, Francine Bellson told The Jazz Joy and Roy syndicated radio show, “I like to call (Sacred) ‘how the Master used two maestros,'” adding, “When (Ellington) did his sacred concert back in 1965 with Louie on drums, he told Louie that the sacred concerts were based on ‘in-the-beginning,’ the first three words of the bible.” She recalled how Ellington explained to Louie that “in the beginning there was lightning and thunder and that’s you!” Ellington exclaimed, pointing out that Louie’s drums were the thunder. Both Ellington and Louie, says Mrs. Bellson, were deeply religious. “Ellington told Louie, ‘You ought to do a sacred concert of your own’ and so it was,” said Bellson, adding, “‘The Sacred Music of Louie Bellson’ combines symphony, big band and choir, while ‘The Jazz Ballet’ is based on the vows of Holy Matrimony…”

On December 5, 1971 he took part in a memorial concert at London’s Queen Elizabeth Hall for drummer Frank King. This tribute show also featured Buddy Rich and British drummer Kenny Clare. The orchestra was led by Irish trombonist Bobby Lamb and American trombonist Raymond Premru. A few years later, Rich (often called the world’s greatest drummer) paid Bellson a compliment by asking him to lead his band on tour while he (Rich) was temporarily disabled by a back injury. Bellson accepted.

On June 25, 2019, The New York Times Magazine listed Louie Bellson among hundreds of artists whose material was reportedly destroyed in the 2008 Universal fire.