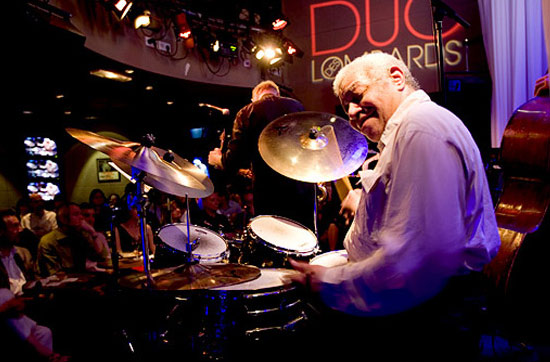 Pete La Roca (born Peter Sims; April 7, 1938 – November 20, 2012)[1] was an American jazz drummer. Born and raised in Harlem by a pianist mother and a stepfather who played trumpet, he was introduced to jazz by his uncle Kenneth Bright, a major shareholder in Circle Records and the manager of rehearsal spaces above the Lafayette Theater. Sims learned percussion in Public School, at the High School of Music and Art, and at the City College of New York, where he played tympani in the CCNY Orchestra. He adopted the name La Roca early in his musical career when he played timbales for six years in Latin bands.
In 1957 Max Roach became aware of him while jamming at Birdland and recommended him to Sonny Rollins. As drummer of Rollins’ trio on the afternoon set at the Village Vanguard on November 3 he became part of the important record A Night at the Village Vanguard (Originally only one of five recorded tracks with La Roca found their way on the album). In 1959 he recorded with Jackie McLean (New Soil) and in a quartet with Tony Scott, Bill Evans and Jimmy Garrison. Besides Garrison he often joined with bassists who played in the Bill Evans Trio, especially Scott LaFaro and Steve Swallow, and also accompanied pianists like Steve Kuhn, Don Friedman and Paul Bley.
Between the end of the 1950s and 1968 he also played with Slide Hampton, the John Coltrane Quartet, Marian McPartland, Art Farmer, Freddie Hubbard, Mose Allison, Charles Lloyd, among others, as well as leading his own group and working as the house drummer at the Jazz Workshop in Boston, Massachusetts. During this period, he twice recorded as leader, firstly on Basra (Blue Note, 1965) and also on Turkish Women at the Bath (Douglas, 1967), also issued as Bliss under pianist Chick Corea’s name on Muse.
In 1968 he stopped taking side-man gigs, and only accepted work as a band leader. La Roca began earning a living by driving a taxi cab in New York City, and later attended law school at New York University. When his second album as leader, Turkish Women at the Bath, was released under Chick Corea’s name without La Roca’s consent, La Roca filed and argued a lawsuit against Douglas Records, and the erroneously-labeled records were recalled.
He returned to jazz in 1979, and recorded one new album as a leader, Swing Time (Blue Note, 1997).