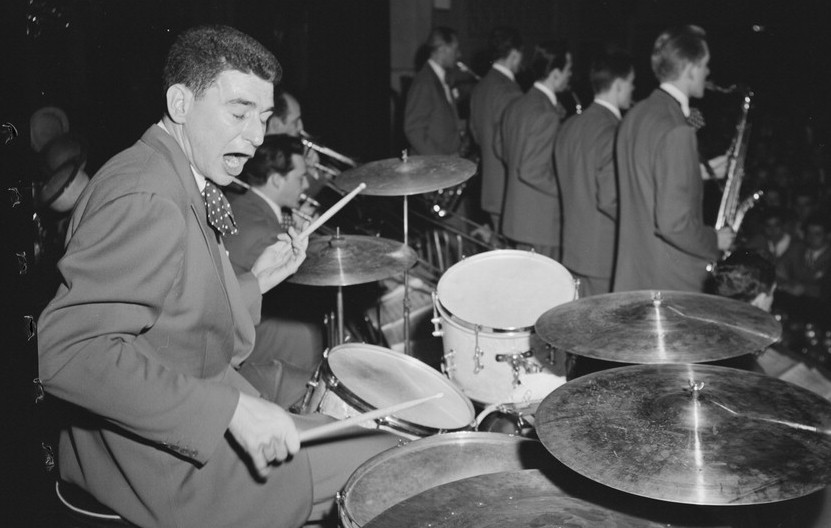 Sheldon “Shelly” Manne (June 11, 1920 – September 26, 1984), was an American jazz drummer. Most frequently associated with West Coast jazz, he was known for his versatility and also played in a number of other styles, including Dixieland, swing, bebop, avant-garde jazz and fusion, as well as contributing to the musical background of hundreds of Hollywood films and television programs.
Manne’s father and uncles were drummers. In his youth he admired many of the leading swing drummers of the day, especially Jo Jones and Dave Tough. Billy Gladstone, a colleague of Manne’s father and the most admired percussionist on the New York theatrical scene, offered the teenage Shelly tips and encouragement. From that time, Manne rapidly developed his style in the clubs of 52nd Street in New York in the late 1930s and 1940s. His first professional job with a known big band was with the Bobby Byrne Orchestra in 1940. In those years, as he became known, he recorded with jazz stars like Coleman Hawkins, Charlie Shavers, and Don Byas. He also worked with a number of musicians mainly associated with Duke Ellington, like Johnny Hodges, Harry Carney, Lawrence Brown, and Rex Stewart.
In 1943, Manne married a Rockette named Florence Butterfield (known affectionately to family and friends as “Flip”). The marriage would last 41 years, until the end of Manne’s life.
When the bebop movement began to change jazz in the 1940s, Manne loved it and adapted to the style rapidly, performing with Dizzy Gillespie and Charlie Parker. Around this time he also worked with rising stars like Flip Phillips, Charlie Ventura, Lennie Tristano, and Lee Konitz.
Manne rose to stardom when he became part of the working bands of Woody Herman and, especially, Stan Kenton in the late 1940s and early 1950s, winning awards and developing a following at a time when jazz was the most popular music in the United States. Joining the hard-swinging Herman outfit allowed Manne to play the bebop he loved. The controversial Kenton band, on the other hand, with its “progressive jazz”, presented obstacles, and many of the complex, overwrought arrangements made it harder to swing. But Manne appreciated the musical freedom that Kenton gave him and saw it as an opportunity to experiment along with what was still a highly innovative band.
He rose to the challenge, finding new colors and rhythms, and developing his ability to provide support in a variety of musical situations.
From the 78-rpm recordings of the 1940s to the LPs of the 1950s and later, to the hundreds of film soundtracks he appeared on, Manne’s recorded output was enormous and often hard to pin down.[22] According to the jazz writer Leonard Feather, Manne’s drumming had been heard on well “over a thousand LPs”—a statement that Feather made in 1960, when Manne had not reached even the midpoint of his 45-year-long career.
An extremely selective list of those with whom Manne performed includes Benny Carter, Earl Hines, Clifford Brown, Zoot Sims, Ben Webster, Maynard Ferguson, Wardell Gray, Lionel Hampton, Junior Mance, Jimmy Giuffre, and Stan Getz. In the 1950s, he recorded two solid albums with Sonny Rollins—Way Out West (Contemporary, 1957) received particular acclaim and helped dispel the notion that West Coast jazz was always different from jazz made on the East Coast—and, in the 1960s, two with Bill Evans. Around the same time in 1959, Manne recorded with the traditional Benny Goodman and the iconoclastic Ornette Coleman, a striking example of his versatility.
One of Manne’s most adventurous 1960s collaborations was with Jack Marshall, the guitarist and arranger celebrated for composing the theme and incidental music for The Munsters TV show in that period. Two duet albums (Sounds Unheard Of!, 1962, and Sounds!, 1966) feature Marshall on guitar, accompanied by Manne playing drums and a wide variety of percussion instruments unusual in jazz, from “Hawaiian slit bamboo sticks”, to a Chinese gong, to castanets, to piccolo Boo-Bam.
Another example of Manne’s ability to transcend the narrow borders of any particular school is the series of trio albums he recorded with guitarist Barney Kessel and bassist Ray Brown as “The Poll Winners”. (They had all won numerous polls conducted by the popular publications of the day; the polls are now forgotten,[25] but the albums endure, now reissued on CD.) Manne even dabbled in Dixieland and fusion, as well as “Third Stream” music. He participated in the revival of that jazz precursor ragtime (he appears on several albums devoted to the music of Scott Joplin), and sometimes recorded with musicians best associated with European classical music. He always, however, returned to the straight-ahead jazz he loved best.
print
Loading...
Previous Post Next Post